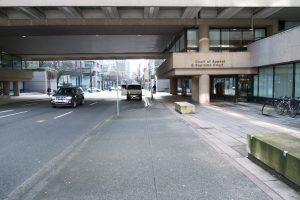 Outside the B.C. Supreme Court during the Meng Wanzhou case, protesters rallied to support her. But some of those holding signs demanding her protection, were duped into being there.

Meng, CFO of tech giant Huawei, was arrested in Vancouver back in December 2018. It was upon request of the U.S. which seeks to extradite her for charges of fraud.

Several people showed up on the first day of her hearing, Monday, with signs supporting her.

Actor Julia Hackstaff was one of those protesters. From her understanding, she was there to be an extra in a movie for the payment of $100.

“It’s terrible, it’s horrifying,” she said to CBC. “I was sincerely going to participate in something that seemed cool and a nice opportunity. And they took advantage of my profession and my passion … to make a false protest.”

Another person said they got $150 to show up at the courthouse and hold a sign.

Arriving at the Meng Wanzhou Case

Both protesters said they didn’t know the person who recruited them. Once they got to the court house, a woman who went by “Jowe” handed out the signs.

There was something very strange about this protest this morning. Participants said they had only heard about the hearing last minute, hence the basic signs. They were unwilling to tell media about their cause and where they were from and were becoming agitated at questions. https://t.co/Gnva9yaW4b

Hackstaff realized what was happening and left without her pay check.

More details are yet to come.

If you liked this bizarre court story, read about this B.C. municipality with councillors, a mayor, but no residents.