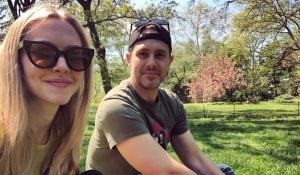 Amanda Seyfried is in town! The actress, model and singer-songwriter is no stranger to Vancouver having filmed the dark comedy Jennifer’s Body with Megan Fox in the spring of 2008. She also filmed the romance horror Red Riding Hood here during the summer of 2010.

She’s back in town shooting the film adaptation of Seattle author Garth Stein’s novel The Art of Racing in The Rain. This Is Us star Milo Ventimiglia plays Denny Smith and Seyfried plays Eve Smith. Other stars in the movie include Kathy Baker, Gary Cole, Martin Donovan and Kevin Costner as the voice of Enzo the dog. The Art of Racing in The Rain started production in Vancouver at the end of April and is scheduled to wrap up on July 23.

Seyfried and husband Thomas Sadoski have been taking in the sights and sounds of Beautiful British Columbia during their spare time:

Structured and saturated but still

The Hollywood star started off as a model and child actor on soap opera TV shows. Her movie debut was as Karen Smith in the 2004 teen comedy Mean Girls which won her an MTV Movie Award. She’s also known for her music roles in Mamma Mia! and Les Misérables.

You can find me at Dude Chilling Park

She’s definitely a fan of Vancouver’s ban on plastic straws!

#ecofriendly options for my fellow suckers. It’s a start…

Husband and fellow actor Thomas Sadoski has got some good snaps of BC on his Instagram too. He’s known for his role on HBO’s The Newsroom and CBS’s Life in Pieces which was recently renewed for a fourth season.

#mcm on a bridge

“And this our life, exempt from public haunt, Finds tongues in trees, books in the running brooks, Sermons in stones, and good in everything. I would not change it.” -AYLI II, i

The couple has been spotted at Bards of the Beach and at a Whitecaps game:

Seyfried or @mingey as she’s known on the ‘Gram is not only a fan of the outdoors but also an animal lover. In addition to capturing some of BC’s nature she has also been posting snaps of flowers, crows, dogs and some on-set shenanigans.

Is that Vancouver Aquarium?