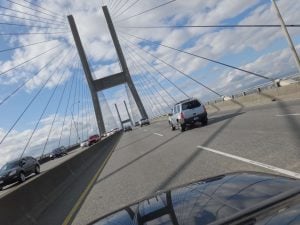 This past weekend, a seventh lane opened up on the Alex Fraser Bridge.

At this moment, four lanes are available for southbound traffic, with three lanes remaining for northbound until the new movable barrier is implemented this fall.

Crews are also working on adding “intelligent transportation signs” for the counter-flow operation.

To make room for this additional lane, the previous six lanes have been reduced in width from approximately 3.7 metres to 3.55 metres (about a six-inch reduction).

As a result of this seventh lane, the speed limit on the bridge has been permanently lowered from 90 km/h to 70 km/h to “keep travellers safe and traffic flowing efficiently during counter-flow”.

However, even with the lower speed limit, this $70M project is expected to help motorists save approximately 15 minutes on their commute.