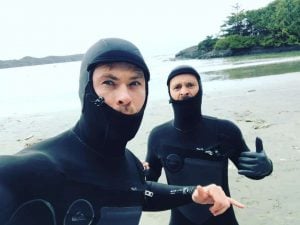 Last month the likes of Lorde, Rob Lowe, Nelly, Michael Buble and Katherine Langford were in town. This April you can also find an array of music artists and Hollywood actors in Vancouver:

How to Get Away with Murder star Viola Davis is slated for this period drama which is scheduled to start production in town this month.

#HTGAWM roll call! Where are you watching from? #TGIT

This Is Us star Milo Ventimiglia stars in this film adaptation of Seattle author Garth Stein’s novel The Art of Racing in the Rain. It starts filming in Vancouver at the end of April.

Cuban-American singer Camila Cabello kicks off her North American tour in Vancouver in support of her 2018 debut album Camila. She plays the Orpheum Theatre on April 9.

So good to be back amongst the football loving, music loving, life loving Argentinians. Looking forward to more fun at GEBA tomorrow night and Sunday in Santiago.

Not sure if we’re robbing banks or surfing but it’s damn cold in Canada 🇨🇦 well worth it though , what a beautiful place !! @azzagrist

Vancouver’s very own Sarah Jeffery stars in the Charmed reboot and celebrates her 22nd birthday on April 3. She recently starred in FOX’s Wayward Pines which also filmed locally and in NBC’s Shades of Blue starring Jennifer Lopez.

Actress and singer Kristin Chenoweth joined the cast of Trial & Error for season 2 which has moved production to Vancouver from Burbank.

You thought their first case was a real killer… #TrialAndError
📷: @KChenoweth pic.twitter.com/uo7mWk9wAI

New Girl star Lamorne Morris stars in Valley of the Boom, a limited series by National Geographic Channel. The docudrama is set in the 90’s tech boom in Silicon Valley.

I guarantee I can beat Any #nba player in a 3 point contest. #guarantee #thewrap 📸: @msayles MUA: @michelledemilt

Get Out star Allison Williams wrapped up the movie The Perfectionist in town last month and will be back as she joins the third season of A Series of Unfortunate Events on Netflix.

Smiling through some very @unfortunate news… Look who's joining #ASOUE for Seasons 2 & 3! So happy I can finally tell you guys reason #2 I've been so busy. It's been so much fun these past few months, and I can't wait for you guys to see it. I'll be bugging these two bad-asses for another couple of months of Lemony Snicket-y fun 👁

The O.C and Hart of Dixie star Rachel Bilson co-stars in the new ABC crime & comedy drama Take Two. The show is scheduled to shoot its first season order until July 23.

Laugh and hang loose my friends! Hope you are all having a chill and happy St. Patrick’s Day! This A-Maze-Ing Laughter sculpture made my day! #happystpatricksday #stpattysday #stpatricksday2018 #vancouver #vancity #a-maze-inglaughter