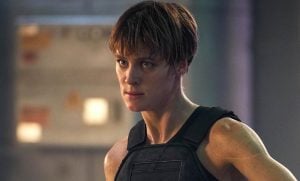 Vancouver-born actress Mackenzie Davis is adding to her resume of big movies like The Martian and Blade Runner 2049 with a starring role in Terminator: Dark Fate. The sixth film in the franchise, takes place right after Terminator 2: Judgment Day and brings back Arnold Schwarzenegger as T-800 “Model 101” and Linda Hamilton as Sarah Connor.

Davis attended Collingwood School in West Vancouver and then went to McGill University in Montreal and furthered her studies in acting in New York City.

Davis plays Grace, a hybrid of sorts sent from the future to protect the target of the new iteration of Terminators. The solider-assassin is a mix of human and machine. The film which costed an estimated $160-200 million will premiere on November 1, 2019. It was filmed in Hungary, United Kingdom, Spain and Mexico.

Davis also starred as Cameron Howe in AMC’s Halt and Catch Fire which ran for 40 episodes across 4 seasons. Last year she was seen in Tully which filmed in Vancouver back in 2016. The comedy-drama also starred Charlize Theron who gained almost 50 pounds for the role.

Fans of both Davis and the Terminator films are ecstatic with her casting:

“I don’t care about the Terminator movies anymore”

me: Mackenzie Davis in Terminator pic.twitter.com/4xZYjT9K5b

I barely care that much for Terminator franchise in general, but Mackenzie Davis as a Terminator/Human hybrid thing is enough for me to get HYPED. https://t.co/mIdjGAsvUI

The only thing I am totally sold on in that #TerminatorDarkFate trailer is: Mackenzie Davis is a movie star who can (and does) do everything. https://t.co/DT6jf7q9hB

I've never watched a Terminator movie but I appreciate a buff Mackenzie Davis looking like she will kill me. pic.twitter.com/FLeKH4dCCU

Mackenzie Davis does a great Arnold impression in the HALT AND CATCH FIRE episode where the Mutiny programmers all watch TERMINATOR on VHS. I love that she’s in DARK FATE and can’t wait to see it. pic.twitter.com/EdOPpcPL36

The new Terminator movie is primarily woman-focused, I am deeply attracted to Mackenzie Davis’ arms and shoulders, and Sarah Connor is a whole-ass mood. Count me in