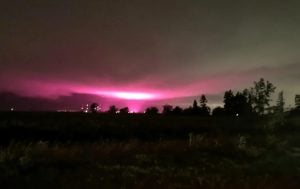 Reddit user u/intrudingturtle posted the picture with the caption “Anybody know why the sky is pink in Tsawwassen?”

Some users commented that the pink phenomenon was “related to a pot plant”.

One Reddit user commented that the light is from pot farm Pure Sunfarms, but another user quickly corrected that.

“Actually pure sun farms uses HPS yellow lights. It’s BC Tweed that uses the pink LED grow lights. Both of them are pretty much next to each other along 99” reads a comment by Reddit user davislive.

As we head into the weekend, local skies are expected to clear up and temperatures are set to rise again.