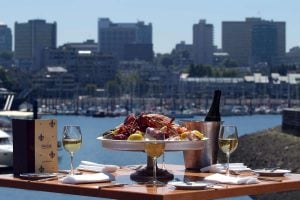 BC is known for its delectable variety of cuisine, but it also offers some of the best outdoor dining in the country.

Not only are there a multitude of patios in Metro Vancouver, but many of them are right on the water. As such, they make the perfect backdrop for enjoying food and drink with loved ones.

Whether its a romantic meal for two, a catch up with pals, or a family affair, these beautiful dining accommodations take the experience to the next level.

In addition, OpenTable diners recently released a list of the top restaurants according to 550,000 online reviews. Drawn from verified OpenTable diners between May 1, 2017 and April 30, 2018, the list includes an impressive array of 30 BC eateries in its top 100.

As such, BC placed second in all of Canada. Only Ontario, with 41 honourees, beat the West Coast province.

Some notable mentions on the list include the charming Teahouse in Stanley Park, as well as the gorgeous patio on the water at Yaletown’s Provence Marinaside.

Looking for more incredible dining experiences? Check out the location and schedule for this year’s Dinner in the Sky!