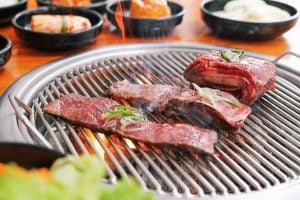 Craving more Korean BBQ in your life? You’re in luck. The Korean BBQ giant Seorae is opening up its very first North American location in Richmond early this Summer.

The popular chain originated in South Korea just over 10 years ago. They’re known for their tender and juicy galmaegisal (aka pork skirt meat) that comes in a variety of flavours, including: original, spicy and garlic.

The meat consists of a delicious blend of Korean spices and then grilled to perfection. Other menu items include: Seoul Bulgogi, Pork Ribs Gamjatang, Dolsot Bibimbap and more.

Seorae Korean Charcoal BBQ has been such a hit that they now have nearly 300 locations worldwide.

The Richmond location is slated to open late June. It will be a welcome addition to the community that already has a healthy Korean BBQ scene. But you can never have enough.

Check out some of Richmond’s other Korean BBQ joints or these ones in Burnaby or Surrey while you’re waiting for this spot to open.

When you can’t decide which one to eat, just choose all! 🙌🏻 • Seorae Korean Charcoal BBQ has a wide range of premium beef/pork/chicken cuts you can choose from. 👌🏻 • Don’t forget to pair it with Gyeran Jjim! 😉 ___ #SeoraeSG