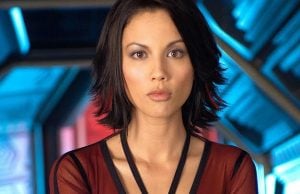 Doig is known for her roles in sci-fi hit series like Andromeda, Stargate SG-1 and Continuum. In addition to a regular role on the Canadian production of Continuum she also appeared on CBC’s Arctic Air.

The self-describing title represents an arrangement between a young actress and A-list movie star who offers her a $10-million dollar contract – for a marriage.

The Hollywood tale films right here in Hollywood North this summer after the pilot was shot in Metro Vancouver last fall.

E! has picked up the series for a 10-episode first season. It’s expected to shoot from July until November (DGC-BC Production List).

E! is known for its pop culture original programming which includes reality series, scripted dramas and entertainment news. The network’s first scripted series was The Royals which premiered in 2015 and has been renewed for a third season.

The Arrangement is expected to premiere in 2017.