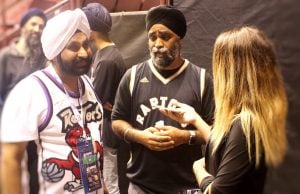 The Toronto Raptors visited Rogers Arena on October 1st, 2016 to play the Golden State Warriors as part of the NBA Canada Series.

Given the popularity of the opposing team (and newcomer Kevin Durant on the roster), fans from all over metro Vancouver showed their love for basketball like never before.

Whether you rocked “We The North” attire or sported the Warriors iconic blue and yellow, the game transported fans from all over to a time and place where basketball felt more than welcome in the west coast of Canada.

The sold-out event had an unbelievable atmosphere which made us believe it’s time the NBA made a return to our city.

It wasn’t surprising to catch up with Raptors Superfan Nav Bhatia on the sidelines. He has never missed a Toronto game – including each preseason exhibition.

“Every time I come here, I get so much love from everybody,” Bhatia boasts.

“This gives me an opportunity to integrate my community [the South Asians and Sikhs] into the mainstream. That’s what I use the game of basketball in order to do; to fuel the love through all the communities and make Canada richer in that.”

We caught up with him and discussed what the city needs to do in order to bring the NBA back to Vancouver.

“I think we’re there,” says Sajjan. “I think now it’s just about getting the right people in the mix.”

So, does that mean it’s definitely happening?

“I wish I had all of the answers for that. I think there is a lot of potential here; the fans are great, basketball is growing, there’s a lot of opportunity for it. At the end of the day, all of the right people have to come together for it.”

Sajjan is optimistic that we have what it takes in Vancouver to be home to an NBA team once again, especially after welcoming the Canada Series these past few years.

Now, it’s just a matter of making the jump shot.

“We’ve got all of the facilities and most importantly, we’ve got the fans.”

Do you think Vancouver is ready to join the NBA again? Let us know how you would feel if basketball made its return to our city in the comments below.