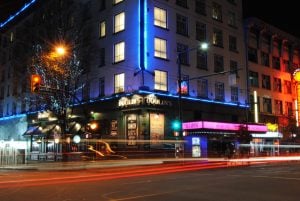 October 31st will mark an end to familiar establishments on 654 Nelson and Granville Street.

Doolin’s Irish Pub, along with neighbouring businesses the Belmont Bar and Comfort Inn have announced they’ll be closing doors for good to give way to a new boutique hotel.

The new project will be developed by Vancouver-based hospitality group, Pacific Reach. The group plans to develop Vancouver’s first true lifestyle boutique property at the new Hotel Belmont and to deliver a unique entertainment and dining experience.

“The city over the past twenty years has evolved beyond what any of us could have imagined,” says Azim Jamal, President and CEO of Pacific Reach. “The decision to close these storied venues was not an easy one. But, we want to focus on the future of the city and what we believe will be a renaissance for a new and invigorated Granville Street. We are very excited for what’s next and to do our part to rid Vancouver of its ‘No fun city’ moniker.”

A Building with History

The storied building at the corner of Granville and Nelson was erected in 1912 and has gone on to house the Hotel Belmont, the Nelson Place Hotel, and the Nelson Beer Parlour. It remained the latter until the 1990s when the Beer Parlour became a Tapas restaurant, called Babalu, that famously booked a young Vancouverite called Michael Buble.

Below street level, where the Belmont Bar current sits, used to be home to the exotic nightclub, Champagne Charlies. By the mid-90s, Charlies gave way to Granville Entertainment’s The Cellar.

Fast forward to 2019, and the property will go back to its roots as a hotel. Building off the rich legacy at the iconic site, the new boutique hotel will hope to become a magnet of trend-setting culture in the heart of Vancouver’s entertainment district.

Before closing its doors on November 1st, Vancouverites and visitors can celebrate the history of Doolin’s Irish Pub one last time.

There will be a number of events taking place during October, the first of which is the UFC match between Conor McGregor and Khabib Nurmagomedov on October 6th, followed by Halloween parties on October 27th and 31st 2018.

Take a trip down memory lane by reminiscing some of Vancouver’s hottest nightclub establishments during the 80s, 90s and 00s.