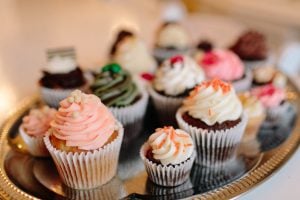 Craving something sweet? This Fraser Valley based bakery has got you covered. Tracycakes takes dessert to a new level with over 60 cupcake offerings, among other things.

They have two locations—one in Abbotsford and one in Langley. Obviously they only have a limited number of flavours each day to ensure freshness. But peruse their extensive menu and order 48-hours in advance to get the exact ones you want.

Trust us, you’re going to need that much time to decide on which flavours you want to try anyways. These are just a few of the options available.

A Moment on Your Lips, Forever on Your Hips: A chocolate cupcake baked together with a cheesecake filling and iced with chocolate buttercream.

Cuppuccino: A chocolate cupcake with cappuccino icing, topped with an espresso bean—tastes just like a real cappuccino.

What Does The Fox Say?: This chocolate cupcake is filled with Nutella and topped off with vanilla buttercream and orange sprinkles.

RELATED: Treat Yourself To ‘Sweet Somethings’ At This New Vancouver Cafe

It’s Five O’clock Somewhere: A raspberry-filled vanilla cupcake topped with lime buttercream icing and a raspberry slice—reminiscent of a margarita.

Chocolate Squirrel: A chocolate cupcake filled with Nutella and topped off with chocolate whipped cream icing.

Mars Bar: A chocolate cupcake filled with caramel, topped with a chocolate buttercream icing and crowned with a Mars bar.

The quaint cafe is also the perfect place for lunch—with a selection of coffee & tea, sandwiches, paninis, wraps, soups, salads and quiche.

They even have High Tea with all the fixings. Kick it up a notch by ordering champagne with your BFF’s!

Locations: 2636 Montrose Avenue in Abbotsford and 21594 48th Avenue in Langley