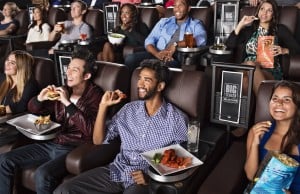 Calling all movie-goers! There’s a new VIP theatre on its way.

Cineplex announced they will be opening an all new theatre with VIP cinemas at Park Royal Shopping Centre. It is slated for a late 2018 opening.

The state-of-the-art theatre will feature luxury reclining seats at the touch of a button, in all auditoriums.

Cineplex Cinemas Park Royal and VIP will be on the south side of the mall, spanning over 44,000 square feet. It will have 11 screens offering Ultra AVX, D-BOX Motion Seats and VIP Cinemas.

The new VIP theatre will mark the fourth of its kind in BC.

“Just like Cineplex Cinemas Marine Gateway and VIP which opened last March, this new theatre in Park Royal will be a great way for local residents to take time out of their busy lives to indulge in some well-deserved relaxation and entertainment in a luxurious and refined setting,” said Pat Marshall, Vice President, Communications and Investor Relations, Cineplex Entertainment.

The adults-only VIP experience also features a fully-licensed lounge to relax in before and after the movie.

The VIP auditoriums also have luxury recliners and guests can order from an extensive food and drink menu.

Items include: artisanal cheese plates, charcuterie platters, flatbreads, salads, burgers, wine, spirits and premium craft beers. Guests can enjoy any of the menu items in the comfort of their seat while they experience the movie.

“Cineplex compliments our best-in-class shopping and dining experiences and will be an attraction to those living at or close to Park Royal. The addition of Cineplex Cinemas Park Royal and VIP marks another major milestone in Park Royal’s commitment to enhancing the offerings in West Vancouver and the North Shore,” said Rick Amantea, Vice President of Community Partnerships and Development at Park Royal.