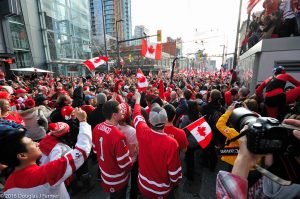 It’s hard to believe it’s been more than a decade since Vancouver hosted the 2010 Winter Olympics, welcoming the world to our city with glowing hearts.

A lot has changed in the past 11 years, from hosting the Olympic Games to grappling with a global pandemic.

Over the last year, we’ve seen the same streets that once hosted an influx of tourists look a lot more like a ghost town.

And that eerie emptiness was even more apparent during the first wave of the pandemic when local businesses and restaurants shuttered.

But let’s remember those glory days when Vancouver felt on top of the world by looking back at just a few of the most memorable moments the 2010 Olympics brought to the city from Feb. 12th to the 28th.

Memorable Moments From The 2010 Winter Olympics

Team Canada at the Opening Ceremony

Held at none other than BC Place, this was definitely the place to be to kick off the Olympic Games. You could barely hear when they announced Team Canada coming out at the Opening Ceremony’s Parade of Nations because of the sheer volume of passionate Canadians.

‘The Great One’ Lights the Olympic Cauldron

This was a proud moment for Canadians nationwide. Canadian hockey great Wayne Gretzky did the honours of lighting up the permanent Olympic Cauldron at Jack Poole Plaza next to the Vancouver Convention Centre in Coal Harbour. The memorable event symbolized the start of the 17-day Olympic Games.

Two giant structures consisting of the Olympic Rings were put up in Coal Harbour and outside the YVR Airport. They turned gold whenever a Canadian won a gold medal, which further added to the excitement of it all. Throughout the two week period, the rings radiated gold 14 times.

There’s something extra special about getting that first Olympic gold medal for Canada on home turf. Alex Bilodeau will be remembered for achieving that for his performance in the Men’s Freestyle Skiing Moguls, which was held at Cypress Mountain.

Tessa Virtue and Scott Moir (or Canada’s sweethearts as they’re better known) showcased their eloquent ice dancing skills and melted hearts worldwide with their incredible bond that has spanned decades. Of course, they also took home the gold for Canada.

Of course Canada absolutely dominated at ice hockey during the 2010 Winter Olympics. The Canadian women’s hockey team took home the gold after defeating their American counterparts 2-0. And everyone remembers where they were when Sidney Crosby scored the golden goal for Team Canada during the men’s ice hockey final.

From far and wide, you could hear the entire city buzzing with excitement and it truly was a moment no Vancouverite will ever forget.

For more amazing past moments across Metro Vancouver, check out our History section.