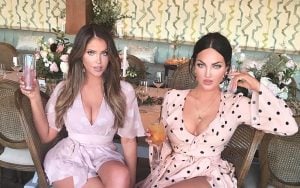 There’s a new reality docuseries to obsess over this summer featuring two familiar faces. Langley-born Natalie Halcro and Olivia Pierson have risen in the ranks of social media to being top influencers, fashion designers and reality stars.

Now they open up even more of their personal and professional lives on Relatively Nat & Liv.

The pair, which are cousins by blood and business partners by choice, have amassed over 6 million followers combined on Instagram. Add a few hundred thousand more by including Twitter and Facebook and you’ve got some social heavyweights. Natalie @nataliehalcro currently has a tally of 3.7 million while Olivia @oliviapierson sits not far behind at 2.6 million.

Their new show features their family life in Vancouver while they juggle their LA glitz and glam lifestyles. There is a strong mix of business and pleasure as Nat and Liv enlist the help of their brothers Joel and Own for help building their brand.

The show centres on their hometown roots in Vancouver, family-centric mindset and drive to create an empire.

@NatalieHalcro is Queen Ween. Liv’s other half. And co-star of #RelativelyNatAndLiv!

@OliviaPierson is Queen Ween. Nat’s other half. And co-star of #RelativelyNatAndLiv!

In addition to growing their personal brands and fashion and beauty influencers over the years, they starred on WAGS for three seasons which centered around the wives and girlfriends of sportspersons. The best friends continue to make a name for themselves as hot ticket models, brand ambassadors and influencers on social media.

Nat and Liv are actually pretty tight with Kim Kardashian West so it’s no surprise that their show premieres June 2 on E! after Keeping Up With The Kardashians.

You can also keep up with Natalie, Olivia and their entire clan on Relatively Nat & Liv all summer long on the streaming service hayu. It’s available to stream and download June 3. Watch the show and tell us what you think using #RelativelyNatAndLiv.