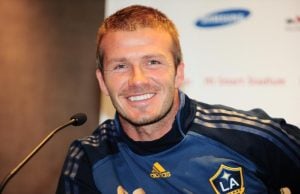 Soccer legend David Beckham is back in the limelight after announcing his intention to lace them up one final time with the LA Galaxy in tonight’s game against the Vancouver Whitecaps. The sports superstar retired from the game in 2013, but the itch to play clearly never left him.

“It’s been a long four years, and I’m excited to get back on the field once again,” said Beckham in a press release.

RELATED: David and Victoria Beckham Are Vacationing in Whistler (Photos)

Beckham’s playing career has been peppered with legendary moments, including his infamous halfway line goal with Manchester United and his jaw-dropping free kick against Greece which sent England to the 2002 World Cup. At 41 years old, tonight’s game will show how many more of those goals Beckham has got in him.

Fans hoping to catch a glimpse of Beckham should buy tickets as soon as they can, as they’re certainly going fast.

Kickoff for tonight’s game is at 7:00 PM sharp at BC Place Stadium.