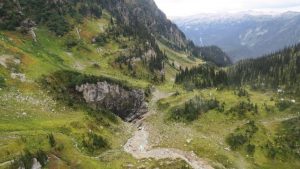 An exciting and mysterious discovery was made by the Ministry of Forests, Lands and Natural Resource in a helicopter ride during a caribou count over Wells Gray Provincial Park last Spring.

They were flying over BC’s pristine park when they spotted this massive unexplored cave nestled in a remote valley.

It was a stroke of good luck that they were able to find it when it wasn’t covered in snow.

Geologist Catherine Hickson was the first to enter the cave in September, after studying satellite images of it for months. She says this is a very significant discovery and may just be a new chapter for Canadian cave exploration. She mentions it’s about the size of a soccer field, at 100-metres by 60-metres.

They’re also calling it ‘Sarlacc’s Pit’ because of its similarities to the Sarlacc character from Star Wars.

The next step is to further explore this cave, which might not be until 2020 when they have enough funding for the project.

They’re not specifying the cave’s exact location so they can preserve the sensitive area.