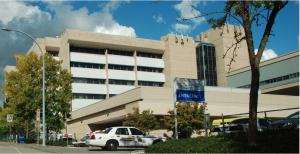 A woman allegedly disguised herself in scrubs and broke into a nurse’s locker to steal cash and credit cards.

The incident happened at Royal Columbian Hospital, April 14th, at about 2:45 am.

RELATED: The VPD Need Your Help To Identify Suspect In Racially Motivated Attack

“We’re all impacted by the pandemic,” said Sgt. Jeff Scott with New Westminster police. “It’s disheartening when somebody would allegedly steal from health care workers.”

The suspect is a woman in her late 20’s and police are reviewing security cameras from the hospital and nearby businesses to gain more information.

Security has been beefed up at Royal Columbian Hospital in #NewWest after woman wearing scrubs steals cash and credit cards from nurse's locker. @NewWestPD Sgt. Jeff Scott says suspect is in her late 20s and he's confident arrest will be made soon. #COVID19 #crime @NEWS1130

Police have an idea of who they’re looking for, but will not say until they have recommended charges to Crown Counsel.

In the meantime, the hospital has added to its security to help prevent any further thefts.

“Security is vigilant, and aware of this,” said Scott to News 1130. “They’re going to continue monitoring people coming and going and making sure that people don’t have access to staff areas, access to lockers.”