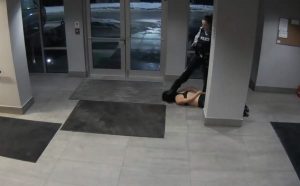 A surveillance video has recently come out, showing a Kelowna RCMP officer dragging someone down the hall and stepping on her head, during a wellness check.

The video has come out as part of a civil lawsuit, filed by B.C. Supreme Court. The nursing student Mona Wang is alleging physical and emotional abuse.

RELATED: Local Organizations Claim VPD Are Racist When It Comes To Street Checks

The incident happened March 23rd, at the University of British Columbia’s Okanagan campus in Kelowna. Officer Cpl. Lacy Browning disputes the claim, saying she only used necessary force to subdue the student when she became violent. She alleges Wang had a box cutter in her hand.

In the notice of claim, Wang said she was experiencing mental distress one evening in January, when her boyfriend called the RCMP for a wellness check.

According to the lawsuit, Browning found Wang lying on her bathroom floor and did not provide medical assistance.

Wang said she couldn’t stand up when the officer demanded she do so.

The officer then allegedly handcuffed Wang and dragged her down the hallway, while punching her in the face.

Wang said she has suffered cuts, swelling and bruising from the mistreatment.

Browning has been placed on administrative duties, while RCMP launch a code of conduct investigation and a criminal investigation.