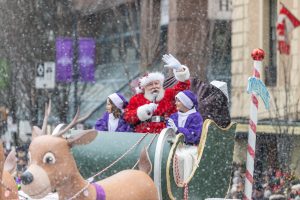 Thousands packed into downtown Vancouver this weekend to catch a glimpse of Santa Claus in the parade.

RELATED: The 20 Best Christmas Events In Metro Vancouver To Check Out, Sorted By Price

The 1.8-kilometre parade route began at noon on Sunday, with Santa making his appearance about an hour later.

That’s a wrap on another magical #TelusSantaClausParade 🎅🏼 Wishing all of you happy holidays!

But first, there were plenty of other floats to see first, including 40 marching bands, choirs and community groups.

There was a float by the Vancouver Aquarium:

And a visit from the Grinch, who was caught before causing too much havoc.

The parade accepted donations, which went toward two charities: the Greater Vancouver Food Bank Society and the CKNW Kids’ Fund

For more seasonal events coming up, check out Stanley Park Bright Nights Christmas Train or the huge Aurora Winter Festival at the PNE.