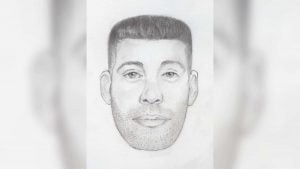 Vancouver Police released on Monday a composite sketch of a suspect in a sexual assault investigation.

At around 5:00 p.m. on November 27, a “14-year-old girl got off a bus on Kingsway and walked north on Miller Street” reads the statement.

As she made her way through the neighbourhood, she was grabbed from behind by an unknown male and pulled into bushes in Brewers Park, just off of Commercial Street. The suspect sexually assaulted the victim before running east through the park.

RELATED: It Might Snow in Metro Vancouver This Weekend, Predicts Forecast

The suspect is described as:

Investigators are still seeking dash-cam footage from anyone who may have been driving in the area between 2:30 p.m. and 6:00 p.m. on November 27th.

Anyone who recognizes the suspect in the composite sketch, or who may have any information about this crime, is asked to call detectives in the VPD’s Sex Crimes Unit at 604-717-0602 or Crime Stoppers anonymously at 1-800-222-8477.