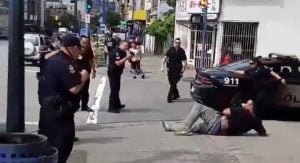 Incidents gone wrong involving police officers and civilians are unfortunately common in the U.S., but they aren’t exclusive to our southern neighbours.

In the video, a man is seen lying flat on his back on the sidewalk, at the intersection of Dunlevy Avenue and East Hastings Street, with three officers surrounding him.

An officer is heard asking the man, who’s lying on his back with his arms in the air, to roll over onto his stomach. The man complies after multiple commands, but continues rolling back-and-forth. He also rolls up his shirt, possibly in an attempt to show officers that he is unarmed.

After one of the officers alludes to having a bean bag gun (a gun that shoots non-lethal, but still impactful “bean bag rounds”), several more police cruisers arrive at the scene, and more officers gather around the man.

In one frame, as many as 10 officers can be seen standing over the man. Several of them have their baton, taser, or gun drawn.

After the man continues to lie flat on his back, against the officers’ continuous commands to roll over onto his stomach, two shots are heard within a five-second span, with a third and final one coming less than ten seconds later.

Several officers then move in to capture the man.

CONTENT WARNING: Brutal @vpd police assault on an unarmed man in the DTES — more a dozen cops ordered him to lie down, he did; then they tasered him & shot him 3 times with a beanbag gun from 10 feet away. @GlobalBC @CBCNews @CTVNews | video from Al Fowler from @VANDUpeople pic.twitter.com/VOQBrA8Pfh

The video was shot by Al Fowler, a member of the BC Association of People on Methadone, whose mission is to improve the lives of people on Methadone, a prescription opiate. Fowler also works with the Vancouver Area Network of Drug Users and the BC Centre for Substance Use.

Following the incident, the man who shot the video, Al Fowler, said that the officers had also used a taser on the man. The VPD would confirm this to CTV News.

“When officers arrived, they encountered a man who was acting aggressively and appeared to be under the influence of drugs. He lunged at one of the officers and attempted to punch him. The officer was not harmed and was able to deploy his Taser. However, the Taser had little effect”, said the VPD.

Describing the events, Fowler said: “The guy with the bean bag gun was like six, seven feet away from him. You know, that’s like point blank range—and he shot him three times: ‘Boom, boom, boom.'”

“The guy’s lying on the ground, on his back with his hands in the air. They should have the skills as police officers to arrest him without escalating the situation. […] I don’t know what he did wrong to get arrested…but I think it was overkill on that part”, he added.

The VPD later confirmed that the 35-year-old Surrey man was treated for injuries and drug impairment at a hospital. Police expect to charge the man with assault of an officer.

For more local news, stay tuned to our Twitter.