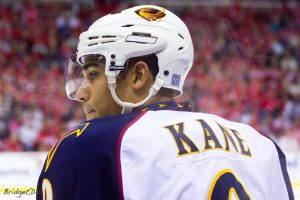 He was reported to have about $26.8 million in debt, and is also facing six active lawsuits and proceedings with lending agencies.

RELATED: Canucks Fans Can Go To The SportsBar At Rogers Arena During Games This Season

Evander Kane grew up in Vancouver, B.C., within the East Van region, and had played for the Vancouver Giants. As a result, he built quite a big fan base locally.

Just two years ago, he signed a seven-year deal worth $49 million, with the San Jose Sharks.

The bankruptcy filing stated that he may not play this hockey season, due to health concerns of his newborn, however he has been participating in training camp. San Jose would be able to carry over the contract until the next season.

Kane has made $52.9 million throughout his 11-year career and has listed liabilities at $26.8 million with assets of $10.2 million.

He currently has seven dependents living with him, including a 6-month-old daughter, 27-year-old sister, mother, father, two uncles and his grandmother.

Kane is a co-head on the Hockey Diversity Alliance, which works to help end systemic racism and intolerance in hockey. He also recently made a video to bring awareness to Vancouver restaurants struggling to survive in the pandemic.

For news updates in Metro Vancouver, check out our News section.