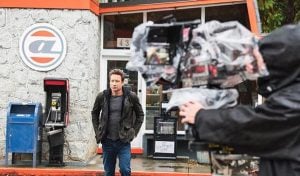 There will be plenty of reruns and holiday specials on TV this month after you catch all your favourite shows’ mid-season finales. The holiday-off season is in full swing so get out the eggnog!

While we get a break from new episodes, production for some of your favourite Vancouver-filmed series also takes a break. Supergirl gets a month off from saving National City as filming shuts down on December 8 and picks things back up again on January 3.

A Series of Unfortunate Events is in the middle of an even longer hiatus, for two months from November 2 until January 2. The break is well deserved as the show has been filming its second and third seasons back-to-back in one long production run. On the other hand, shows like The X-Files, The Magicians, The Man in The High Castle, and When Calls The Heart fully wrap up filming their current seasons this month.

There are 2 brand new shows that start filming in Vancouver this December: a pilot episode for SYFY and a UFO series for History Channel.

“A coming-of-age story set against the backdrop of late 1980s counterculture, which follows a disillusioned teen recruited into a storied high school for assassins.” (IMDb)

The highly anticipated new drama from SYFY network is based on the graphic novel series by writer Rick Remender and artist Wes Craig.The Russo Brothers (Joe and Anthony) are producing the pilot with hopes of getting a series order. They directed Avengers: Infinity War set to release next Spring. Read our interview with local actress Taylor Hickson who previously starred in Aftermath.

The new UFO drama Blue Book is scheduled to start production in town this December for History Channel. It is produced by Robert Zemeckis who is just wrapped up directing a movie, The Women of Marwen, starring Steve Carell in Vancouver. The series is based on the real-life Project Blue Book conducted by the US Air Force. The first season is scheduled for production from December 6, 2017 until April 24, 2018.

It stars Irish actor Aidan Gillen known for playing Littlefinger in HBO’s Game of Thrones and Michael Harney known for playing Sam Healy in Netflix’s Orange Is the New Black. Also starring is local actress Laura Mennell from Mission, BC. The 37-year-old has also recently appeared in other Vancouver-filmed shows like The Man in the High Castle and Van Helsing.

There are 4 shows wrapping up filming of their current seasons in Vancouver this December:

Season 3 of #TheMagicians is all about following the clues. Keep an 👁 on our profile to see what we mean 😉

The 13-episode third season of The Magicians finishes filming in Vancouver on December 15, 2017 and  premieres on January 10, 2018 on SYFY. The fantasy-adventure series features sorcery, magic, fantasy and so much more. Read our interview with Director Joshua Butler who has directed a number of Vancouver show episodes including The Magicians.

Thanks for a wonderful Comic Con! #themagicians #itsafanthing #SDCC #SYFY

The truth is closer than ever. 👽 #TheXFiles returns January 3 on FOX.

Mulder and Scully, David Duchovny and Gillian Anderson respectively, return to Vancouver for the second revival season or 11th season overall of The X-Files. The new season wraps up production in town on December 21, 2017 and premieres on January 3, 2018 on FOX.

The popular sci-fi show was rebooted a few years ago as Season 10 filmed in Vancouver during 2015. It aired last year and was renewed again for this year. The show was a staple in town during the 90’s as its first five seasons and a TV movie were shot here.

When Calls The Heart

Have you heard the news, #Hearties?! Season Five premiere date has been announced! Tune in to @hallmarkchannel February 18th at 9/8c! Raise your hand if you’ll be watching! Be sure to also catch the Christmas special headed your way on Christmas Day! #WhenCallsTheHeart #Hearties #HallmarkChannel #CountdownToChristmas (📷: @erinkrakow)

When Calls The Heart premieres its fifth season on Hallmark Channel in a big way with a 2-hour Christmas special this month. It then continues with a 10-epsiode run starting on February 18, 2018. Production wraps up in Vancouver  on December 21, 2017.

Aunt Becky aka Lori Loughlin co-stars in this small town western family drama. The series’ pilot episode originally aired as a movie-of-the-week. The Canadian-American co-production is based on the book Canadian West Series by Janette Oke.

Which one of us is on a caffeine high? ☕️ @phutton 🤣 late night on set of @wcth_tv @hallmarkchannel ❤️

The Man in the High Castle

The Amazon Prime drama tacked on an extra week of production and is now scheduled to wrap up its third season by December 8, 2017. The dark alternate history series will premiere in 2018. Read our interview with local actor Quinn Lord who plays Thomas.

So after saying hello to some brand new TV productions  and saying goodbye to others that are wrapping up, here’s a look at the rest of the Vancouver-filmed TV shows scheduled production dates.

Once Upon a Time – Season 7 scheduled until April 2

The Flash – Season 4 scheduled until April 21

Last month there were 26 TV shows filming in Vancouver as well as 12 movies including Skyscrapper starring Dwayne “The Rock” Johnson.

The new Freeform mermaid drama series wrapped up filming for its first season in Vancouver last month. It’s scheduled to premiere in 2018.

The History Channel drama relocated production to Vancouver for season 2 which wrapped up last month.Olivia Munn joined the cast of this military-drama which was previously filmed in North Carolina and California. It follows the lives and missions of the US Navy’s SEAL Team Six. She shot The Predator in town earlier this spring and The Buddy Games this summer as well.

The Hollywood-Cinderella story is a hit on E! Network. It follows the ‘arrangement’ between a young actress and an A-list movie star: a $10 million dollar contract for marriage. Filming for its second season wrapped up in early November.

This refugee drama starring Steve Zahn shot its pilot in Vancouver and Vancouver Island this Spring and was picked up for a series order by ABC in May. Filming for its first season wrapped up last month.

John Cho (Star Trek, Harold & Kumar) joined the cast of The Exorcist which has moved its production to Vancouver after shooting the first season in Chicago. It premiered its second season on September 29 on FOX and wrapped up filming mid-November.