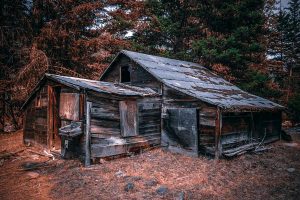 Explore BC in a whole new way by going on a road trip following the Tulameen ghost town trail.

According to Vancouver Trails—this is just one of many routes put together and published by Home Oil Distributors Limited.

The Tulameen ghost town trail takes you on a 120 kilometre journey between Princeton and Merritt—where you will discover four abandoned towns.

Start the journey off in Princeton—a small town near the Similkameen and Tulameen rivers. It got its name when the Prince of Wales visited Canada, back in 1860. Before that, it was called Vermilion Forks.

Travel along the narrow winding road to come across your first destination of Coalmont, which is about 20 kms from Princeton.

While not a full ghost town—Coalmont became widely forgotten about. But it still has a population of about 100 people. And it does bring in some outdoor enthusiasts for its impressive recreational activities, especially fishing.

The village was founded around the turn of the century and it was used mainly as a mining town.

Go past the historic hotel and drive for about two kms before stumbling across the ghost town of Granite Creek. It used to be one of the largest settlements in the province.

Gold was discovered in the creek and the town blossomed to a population of about 2,000 people, with 10 stores and 13 saloons.

Around $90,000 worth of gold was found in the creek within the first year alone. It lasted a few years before all of it was gone—and the town became abandoned.

The next stop on the list is Blakeburn, which is another 8 kms or so down the road from Granite Creek.

It was once was a coal mining community and it’s situated right above Coalmont. Blakeburn was named after William John “Blake” Wilson, the President of Coalmont Collieries Ltd. in 1923.

The town was home to more than 500 people at its peak, with a school, community hall, two churches, several homes, tennis courts and an ice rink.

Forty-five people were killed there in 1930, when a lightning storm caused an explosion in the area. The mine reopened the following year and coal operation continued for another decade. But in 1940, it was shut down for economic reasons.

Lastly, you’ll have to retrace your route from Blakeburn to Granite Creek and travel back to Coalmont. From there, you’ll make a left turn at the hotel and continue along the valley of Tulameen to the settlement with its same name, that was formerly called Otter Flats.

This ghost town has a rich history relating to the fur brigade. A mining camp also popped up in the area during the gold rush days in the late 1800s. Similar to Granite Creek—it was short lived.

The trail then takes you into Otter Valley where you will eventually make your way to Merritt.

These must-visit ghost towns are perfect for those who want to learn about BC’s history and explore an area that is more off the beaten path.