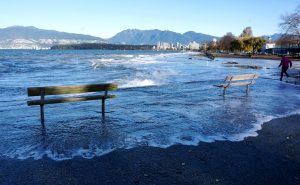 Environment Canada issued another weather warning on Tuesday morning for the potential atmospheric river expected on the South Coast of British Columbia.

In addition to heavy rainfall, the event is expected to melt weeks’ worth of snow at a rapid rate which could trigger localized flooding in areas with poor drainage.

As of writing, there are flood concerns for the following areas:

“Heavy rain will develop early this afternoon as the first system arrives and continue until Wednesday afternoon as additional systems impact the coast,” reads the warning.

The torrential rain is expected to bring 75 to 100 millimetres of rain to most parts of Metro Vancouver and the Fraser Valley. The weather agency states the North Shore mountains will be the heaviest hit area.

The last time rivers rose due to torrential rain was in mid-November, causing catastrophic damage to Abbotsford.

While the city still remains under a state of emergency, forecasts predicts the region will likely avoid any serious impacts from this week’s storm.