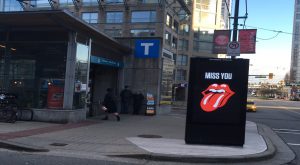 Although there has been no official announcement, a pair of large red lips and tongue have been seen around Vancouver and it may just indicate the Rolling Stones are planning a show.

The city has seen the rock band’s logo plastered in different neighbourhoods, paired with names of the band’s singles.

By the Yaletown Canada Line Station, a board posting the Stones’ logo is paired with several single titles, like Miss You, Just a Kiss Away and Let’s Spend the Night Together.

Meanwhile, Get What You Need was seen on an electronic billboard at Canada Place.

And BC Place was graced with the logo and the words, “Miss You.”

The Rolling Stones also posted their logo on Instagram Monday, with the phrase “Feeling Restless.”

It all raises speculation that the band is gearing up to announce a North American tour.

But Vancouver isn’t the only lucky city, as the signs have been seen in cities across the U.S. That includes cities in New York, North Carolina and Pennsylvania among others.

So, The Rolling Stones are coming to @newerafield in Buffalo this Summer. #NoFilter2020 @StepOutBFLO pic.twitter.com/tX7jsmczeN

🚨🚨🚨
👀👅ARE THE ROLLING STONES RETURNING TO CHARLOTTE?!#RollingStones

No other details have yet been announced, but be sure to keep your eyes peeled!

Other shows coming up in Vancouver soon include Harry Styles and Maroon 5.