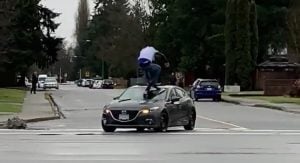 Just when you think you’ve seen it all in Vancouver, a man in Ridge Meadows jumps onto a moving vehicle.

The incident occurred on the intersection of 210th Street and Dewdney Trunk Road, and was shared to Facebook by Bryan Johns this Saturday.

The video begins with the man already on the windshield of the car, a grey Mazda 3, as the car reaches the intersection. The man then manages to get up onto his two feet and then hops onto the roof of the car.

He slips, and the car begins its right turn with the man back sitting on the hood. The car then continues to drive off, picking up a bit of speed, with the man still on the vehicle.

Near the end, the man appears to fall off the right side of the car, while still holding onto the vehicle somehow.

Ridge Meadows RCMP was made aware of the incident on Saturday, and announced that they were investigating.

Ridge meadows RCMP confirm they are investigating an incident involving a man jumping onto a moving vehicle. All parties have been identified. More details on Monday.

On Monday morning, Ridge Meadows released further details, noting that the driver was a female and that “both parties are known to each other.”

The 30-year-old male suspect, known to police, has since been arrested for “engag[ing] in an assault which included jumping onto a moving vehicle.”

The entire video can be viewed, here.