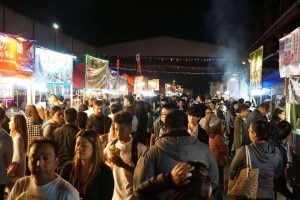 A huge draw during the summer months, each Richmond night market draws crowds in the thousands. A staple for nearly 20 years, the markets and their food stands are synonymous with the City of Richmond.

Now, one of the city’s two popular instalments, often called the Richmond Summer Night Market, is closing its gates for good.

While the exact reason is unknown, Candy Zheng, one of the event’s organizers, informed 604 Now in a phone conversation that the space wasn’t rented for the 2018 summer season. Further, the organizers do not plan to reinstate the market in the future.

The original market is titled the Richmond Night Market, located at 8351 River Road, and is the larger of the two. The one closing this year, at 12631 Vulcan Way, was still quite large. It hosted more than 5 million visitors since its inception in 2008.

Of course, having two night markets heavily increased competition between the two; however, the second instalment couldn’t draw the same crowds or hype as the original.

In its final year, it went by the name of Illumination Summer Night Market, which featured the first and largest summer lighting show in North America. There were various themes and copious lanterns as well as its selection of delicious and unique street food.