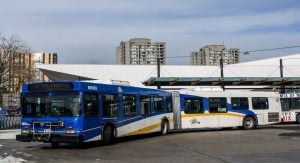 With the TransLink strike in action, both the company president and union warned that Port Coquitlam bus riders will face the worst of it this week.

The strike so far has meant bus drivers will not wear their uniform and maintenance workers are refusing to work overtime.

This has caused dozens of cancellations on the SeaBus, but will now affect a Coast Mountain Bus garage in Port Coquitlam.

This garage has logged the most amount of overtime hours, while also being one of the smallest, in Metro Vancouver.

The PoCo transit centre has only six bays to service buses, with half of those occupied for upgrades to the rapid transit buses.

Additionally, part of the bus company’s fleet that started in 2006 are undergoing improvements and half of those buses service Port Coquitlam.

“You look at all of that combined, we’ll probably be reaching our capacity over the next few days,” said Michael McDaniel, Coast Mountain’s president and general manager to TriCity News.

McDaniel said PoCo will probably be down a couple of buses because of this and some trips may be cancelled.

The TransLink strike began Nov. 1 and a labour agreement has yet to be reached.