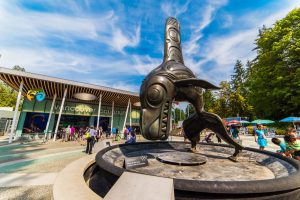 After reopening three months later, some are calling for an end to federal funding for the Vancouver Aquarium.

About a dozen people held a protest in front of the facility, Saturday afternoon. They demanded an end to the practice of catching wild animals for display, as well as breeding animals specifically for aquarium exhibits.

RELATED: Four Recent Flights To YVR May Have Been Exposed To COVID-19

Instead, protesters said they would like to see the aquarium operate as a wildlife rescue and rehabilitation centre for local species.

The aquarium opened its doors to the public again last week, after closing March 17th amid the pandemic.

During the closure, the Stanley park facility said they lost millions of dollars and needed at least one million a month to care for its 70,000 animals.

“It’s a disaster,” Ocean Wise CEO Lasse Gustavsson had said to the Vancouver Sun, in April.

But with help from government funding and donations, the aquarium was able to re-open with a 20-30% capacity.

As of Monday morning, more than 1,230 people have signed the petition against the Vancouver Aquarium.