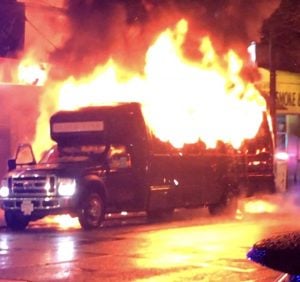 A party bus startled many pedestrians when it suddenly burst into flames in downtown Vancouver on Saturday night.

According to the VPD, the bus driver smelled smoke and pulled over on Smithe St. between Granville and Seymour to investigate.

“When he opened the back door to the bus, it looked like the thing exploded in flames. We don’t know what it was, it’s probably some kind of electrical fire.” states Vancouver Police Inspector Jeff Harris.

The bus was burning at the rear of the vehicle when officials first arrived on the scene around 10 p.m.

There was reportedly an issue with the engine, and both the driver and crews struggled to turn it off. Officials were eventually forced to manually choke off the air filter.

Walked out of a VSO show only to discover firefighters soaking a bus on fire… Roads blocked on Smithe and Seymour #Vancouver pic.twitter.com/80ExoMiz8x

Fortunately, no one was injured.

Vancouver Fire Rescue Services are currently investigating the cause of the fire.