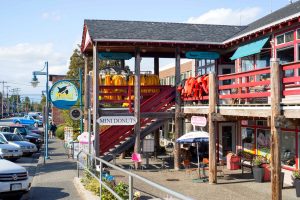 Founded in 1880 as a salmon canning centre, the historic village of Steveston began. It’s been all over the Hollywood movie scene from small American towns and a Japanese city to the Mighty Morphin Power Rangers’ hometown of Angel Grove.

Here are the 4 big movies filmed in Richmond’s Steveston Village.

The drama film based on the best selling novel, The Death and Life of Charlie St. Cloud by Ben Sherwood, was filmed around British Columbia in 2009. It stars Zac Efron, Charlie Tahan, Kim Basinger, Ray Liotta, Donal Logue and also Langley’s own Amandra Crew (Silicon Valley).

The third installment of the Diary of a Wimpy Kid film franchise, based on the book series, filmed around Vancouver for two months in 2011. Toronto’s Devon Bostick (The 100) plays the older brother Rodrick Heffley.

Diary of a Wimpy Kid: Dog Days filmed in Richmond, Coquitlam and Vancouver. It shows Fisherman’s Wharf at Steveston Village as Oceanside Pier in the movie. It also shot at McMath Secondary a few blocks away.

The Hollywood reboot of the mammoth character Godzilla invaded the British Columbia film industry with an estimated total budget of $225 million.

Production started in Vancouver in the Spring of 2013. Additional filming took place in Hawaii that summer.

The highly-anticipated, yet box-office disappointment, reboot Power Rangers movie is the third in the franchise.

It filmed mostly in Richmond’s Steveston Village and in Kamloops; as well as some locations in Vancouver and Burnaby.

Power Rangers used over a dozen on-set locations around Steveston Village which doubled as Angel Grove. That includes streets, parking lots, docks and storefronts; one also doubled as a Krispy Kreme.

While Steveston Village is known for a lot of things, it’s mostly recognized as Storybrooke. The fictional town in ABC’s fairy tale / fantasy drama series Once Upon a Time showcases the best of the fishing town. It is the main setting for the first six seasons. Season 7 continues the stories with some of the original cast and new additions as well as a new setting: Seattle. It’s still filmed in Hollywood North with places like New Westminster doubling as the Seattle streets.

Past popular TV shows like Psych and Stargate SG-1 have filmed in the Steveston area as well.

For more, check out movies you didn’t know were filmed in Squamish, Vancouver Island and Deer Lake Park in Burnaby. There are also a number of movies filmed at SFU and UBC.