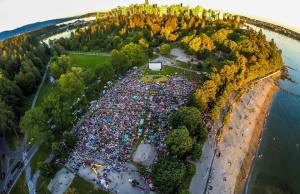 The Evo Summer Cinema Series is returning to Stanley Park this July with a plethora of classics!

A new film will run every Tuesday from July 2nd to August 20th. The movies will be played at dusk at Ceperley Meadows near Second Beach.

The films will be screened on a four story high gigantic screen, allowing visitors the best view possible.

Below are all the movies playing this year