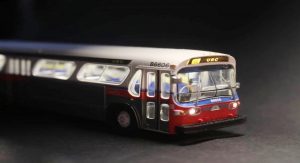 Aside from the seawall and steam clock, there are certain landmarks in Vancouver familiar only to Vancouverites. And one local is replicating those lesser known places, but in miniature size.

Michael Soganic is building a series of tiny Vancouver landmarks that are a fraction of their real size.

And with some 1-87th of the original building size, each replica has an impressive amount of detail.

One of those is the Vernon Drive Grocery Store in East Vancouver.

The 100-year-old storefront is apparently the most photographed corner store in Vancouver.

Other models Soganic has made include the Little Mountain Gallery and an old Vancouver bus.

He also did his own rendition of a “post apocalyptic underwater city.”

But this creative endeavour first peaked during his childhood, when he made model airplanes and toy tanks from kits. These projects in particular, however, started a couple of years ago.

“I made about a dozen tanks and airplanes and things, but they get a little repetitive after a while,” he said to CTV News.

He’s also made a tableau of a SeaBus getting attacked by a giant squid, which let’s hope will never happen.

The artist said he hopes to build a fictional street as an ode to the city he calls home.

Check out his Instagram, which combines photos of his art along with ones of B.C. itself.

For more stories in Vancouver, check out our Culture section.