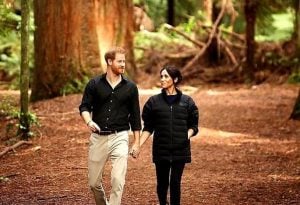 The debate about who should pay the security costs for Meghan Markle and Prince Harry while they’re in Canada rolls on, but it may help to look at how they can positively impact Canada.

One of their biggest contributions may be with the overall perception of Canada.

Apex Marketing’s Eric Smallwood told CBC Radio that from January 1st, 2020 to January 22nd, coverage of Meghan Markle and Prince Harry resulted in an estimated $28 million worth of “earned media value”, or brand awareness/exposure, for Canada.

“We evaluated the value for Canada, as a brand, in association and attributed to stories that were run either on TV news, radio, digital and print news, as well as Facebook and Twitter”, said Smallwood.

Brand awareness is one of those subtle things that you can’t really see, but is constantly at work nonetheless. It’s not that one particular advertisement is going to get you to buy something, it’s being bombarded with “I’m lovin’ it” so many times that McDonald’s is at the forefront of your mind when it comes to fast food.

Take China as an example. Coverage of the Wuhan Coronavirus has made a couple things very clear. First: The outbreak first occurred in China. Second: The Chinese government all but surely downplayed the severity of the outbreak. How do you think this association between China and the coronavirus is affecting the perception of China? (China’s decision to implement a historically-large quarantine can be perceived as an attempt to counteract that.)

Meghan Markle and Prince Harry essentially chose Canada over the U.S. and Buckingham Palace. Whether or not you care about that, and them, it’s definitely a boost to the overall perception of Canada.

Imagine you’re a Vancouverite and you travel abroad to, let’s say, London. Perhaps your cab driver asks you where you’re from and you tell them you’re from Vancouver. “Oh Vancouver! You guys stole Meghan and Harry from us! It must be pretty nice there!”, he says.

Tourism could increase, particularly around places they’ve been or frequent. Have you heard of Martha’s Vineyard? If you have, it’s quite likely because the Kennedys frequented the location when John F. Kennedy was President of the United States.

That’s brand exposure, converted into real dollars and cents for the local economy, and that becomes a possibility with Meghan Markle and Prince Harry now in Canada. (They’re reportedly interested in a $36 million home here in Vancouver.)

So while it appears that we may have to pay for some of their security costs, the royal couple will likely be paying us back; they’ll just be doing it in a different way.