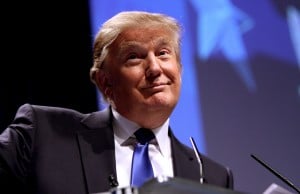 Angus Reid revealed statistics from a new poll on Friday morning, which declared 56 per cent of Canadians surveyed believe that Trump’s name should be removed from the Vancouver tower, and the one in Toronto.

The key findings of the survey include:

When poll opinions were broken down, Angus Reid found an interesting split between men and women. 63 per cent of women believe the name should go, compared to only 49 per cent of the men polled across Canada.

When broken down further, the poll found that majority of men who earn over $100,000 a year believe the Trump name should stay on both towers.

On December 16, 604 Now conducted a Twitter poll, asking followers if they believed the Trump Tower in Vancouver should be renamed. Out of 155 votes, 77% voted yes.

Should the Trump Tower in #Vancouver be renamed?

What side of the fence are you on for this debate? Do you think the Vancouver Mayor’s request to rename the downtown building will be successful? Let us know in the comments below!