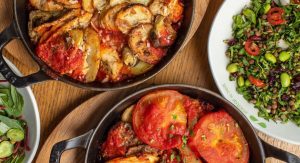 Lebanese Restaurant Zaatar W Zeit has locations in five countries around the world, but now they’re open here in Vancouver.

The restaurant announced its opening on Granville Street Friday, November 29 as their first North American spot.

Specializing in Lebanese street food, this restaurant is extremely popular throughout the Middle East.

Starting in 2009, the restaurant has more than 70 outlets in Kuwait, Qatar, Lebanon, Emirates and Saudi Arabia.

And people are excited – while other Canadians are jealous.

But they also specialize in wraps. You can get freshly baked or cold wraps in nearly 20 different styles.

Their signature dish is manousheh, which is a cultural staple, “made of freshly-baked flatbread seasoned with your choice of herbs, spices or toppings,” as described on their menu.

“It is a national emblem that will surely thrill your senses with new eclectic flavours,” it states.

Be apart of the “Z-takeover,” at its new location, 531 Granville Street.

Other new spots around rather include a new Italian place in New Westminster and this Praguery food truck that now has a storefront.

For more food in Vancouver, check out our Food section.