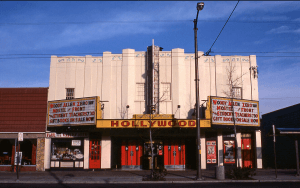 The iconic Hollywood Theatre in Kitsilano is re-opening and this time, it may be serving up alcohol.

After more than five years of sitting vacant, the theatre is coming back to life as a performing arts centre. Its owners are currently in the process of gaining a liquor license.

If the application is approved, alcohol will be served during scheduled, pre-booked events.

“We believe there has truly been a void left in the area when it comes to programming of diverse cultural events (since the theatre closed) such as live music performances, live theatre, movies, cultural events and fundraisers,” states the theatre’s Facebook page.

The art-deco building in Kitsilano first opened in 1935 as a movie theatre, but its fate had been up in the air since 2011.

Hollywood Theatre briefly served as a church in 2012 – complete with a popcorn container as the charity box. It was nearly gutted, after a proposal in 2013 suggested turning the theatre into a fitness centre.

The plan fell through and the building remained vacant, until it was labelled a heritage site last year.

An opening date is yet to be announced.

Some of Vancouver’s theatres have a long history behind them. Read about the Vogue Theatre’s ghost resident. If that’s not your jam, watch some good old Christmas films at theatres around Vancouver.