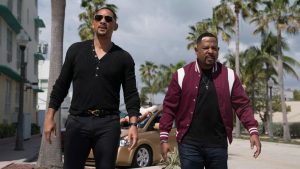 A new year, a new month, a new batch of new movies to check out.

Here are 5 new movies hitting theatres in January 2020 that are worth checking out.

Hold on to your hair because The Grudge is back. This fourth installment in the film series, based on Japanese-Horror film Ju-On: The Grudge, is a reboot of the series. Directed by Nicolas Pesce and produced by Sam Raimi, director of the Tobey Maguire Spider-man trilogy and creator of the Evil Dead films, The Grudge stars Andrew Riseborough (Black Mirror), John Cho (Harold & Kumar), and Betty Gilpin (GLOW).

Yet another horror film, Underwater centers on a team of underwater researchers who fight for survival against “ravenous” creatures that are reawakened by an earthquake. Kristen Stewart, Bella Swan in the Twilight series, stars, along with Jessica Henwick (Iron Fist, The Defenders, Luke Cage) and T.J. Miller, who starred in HBO’s Silicon Valley before leaving the show following allegations of sexual assault.

“We ride together, we die together. Bad Boys for life.” 25 years after the first movie, and 17 years after Bad Boys 2, Will Smith and Martin Lawrence are finally reprising their roles of Mike Lowrey and Marcus Burnett, who join forces once more to take down a cartel boss whom they have a history with. The hit buddy-cup action-comedy also sees the return of Joe Pantoliano’s Captain Howard, as well as a supporting role played by Vanessa Hudgens (High School Musical).

As usual, we like to include an under-the-radar film, and Aneesh Chaganty’s Run is certainly under-the-radar, so much so that there isn’t even a trailer available yet. Chaganty directed the very-impressive 2018 mystery-thriller Searching, which unfolded entirely across computer screens and smartphones. Run will center on a home-schooled teenager who discovers that his mother is keeping a dark secret from him, and will star award-winning Sarah Paulson (American Horror Story). Need I say more?

The Assistant follows a young woman who begins working at a film production company that quickly starts to see the industry for what it is: a series of insidious abuse and shady behaviour. The lead role is played by young star Julia Garner, who won an Emmy award for her role as Ruth Langmore in Netflix’s Ozark. The film also features Matthew Macfadyen (Pride & Prejudice) and Dagmara Domińczyk, who both have recurring roles on HBO’s Succession, aka the best show currently airing.