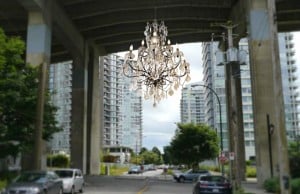 People are calling Vancouver’s newest art installation too decadent for the city, particularly amidst its housing crisis.

Designed by Rodney Graham, the chandelier is now hanging below the Granville Bridge, where it rotates twice a day.

RELATED: Vancouver’s Penthouse Night Club Has The Best Marquees In The City

The 3,400 kilogram chandelier features 600 fake crystals and LED lights. It cost $4.8 million to create and install.

Council approved it back in 2015 and it was funded by luxury residential company, Westbank.

Crews are taking the new Spinning Chandelier art installation for a spin before its unveiling tonight. pic.twitter.com/2QykrsT1JX

But with the work up for display above Beach Avenue, many are not happy about it.

“There is something uniquely fragrant about installing a chandelier in a city bending under the pressures of a housing crisis,” tweeted Avery Zingel.

While Vancouver Mayor Kennedy Stewart called it, “the most important piece of public art in the history of our city,” others took to Twitter with contrasting views.

Others asked if the the light keeps “the homeless sleeping underneath it awake.”

As CBC described the installation as having, “Versailles-like grandeur and excess,” another took to Twitter using the same analogy.

Robert Kraljii compared it to the French riots protesting the monarchy’s overuse of funds. 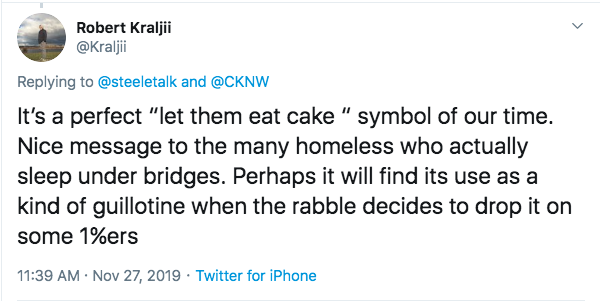 Westbank released a statement regarding the backlash, saying the city can still have nice art and help its community.

“Westbank does not view this as an ‘either or’ situation,” the developer wrote. “There is a pervasive attitude in our city that we must choose between contributing to social infrastructure or making other contributions, whether artistic or cultural, that are seen as less functional.”

The company had previously stated that in addition to contributing to public art, that it would also generate $12 million in other public benefits. That includes social housing and childcare.

Excess was also an underlying theme of the Black Friday “funeral” protest that took place this past weekend. If you’re interested in less-controversial art, check out Pink Alley!