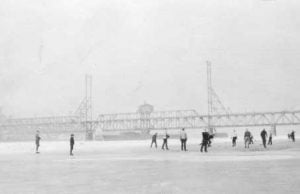 There’s no doubt that it’s freezing out there. With the first White Christmas in a decade and a cold snap that has beaten records, it’s hard to imagine it getting much colder than it already is.

However, although it’s not uncommon for ice to float down the Fraser River in winter, there was once a time when parts of B.C.’s longest river was frozen solid.

Not only did the Fraser River used to freeze over so that people could not only walk across it, but you could even skate and play hockey across its smooth surface.

Let’s take A Look Back

These extraordinary photographs from New Westminster Archives capture such a day in the 1920s.

Against the backdrop of the New Westminster Bridge in the distance, you can see nonchalant groups of Canadians chilling out. In fact, these early western Canadians are proof that once we in the Lower Mainland used to take snow days without so much as batting an eye, easily trading our umbrellas for hockey skates.

In fact, we can rely on the old school mode of transport, the river, not only as an express highway but also a skating rink.

Who says snow days have to be stay-at-home days?

Back in the early 20th century, it was easier for the Fraser to freeze since New Westminster wasn’t a heavily populated city. But the people that did live there sure made the most of their situation.

We can only imagine what it must have felt like to play without pay on the natural ice. But what were the ladies getting up to during the snow day?

In one photograph, there are women exploring the frozen terrain and making sure they got in some great shots in the process. Dressed in fur coats, two women are pictured here, making sure that no one in posterity will say to them “pics or it didn’t happen” when they remember that day they walked on the Fraser River.

Dogs were in on the action and it looks like they were having a good time too. 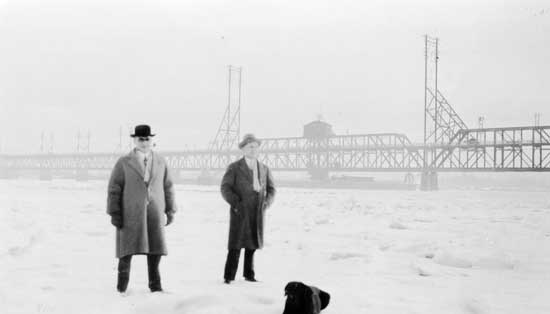