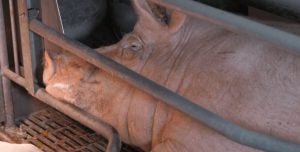 In the video, you can see severely injured and lame pigs, including some with bloody lacerations and volleyball-size umbilical hernias. People will notice them suffering in dungeon-like conditions.

PETA says that “heavily pregnant sows were forced to give birth in farrowing crates hardly bigger than their bodies”. Sadly, many of their babies died unattended.

As for any survivors, they were forced to live alongside their dead and rotting littermates in terrible conditions.

“Mother pigs at Excelsior Hog Farm spend their wretched lives inside cramped metal crates, unable to turn around or attend to their piglets, many of whom are left to die slowly, just out of their reach,” says PETA Senior Vice President of Cruelty Investigations Daphna Nachminovitch.

Excelsior Hog Farm sends pigs to Johnston’s, a Chilliwack-based slaughterhouse. In addition, they claim to work only with suppliers raising pigs under a “clear standard of care” and according to “best treatment practices”.