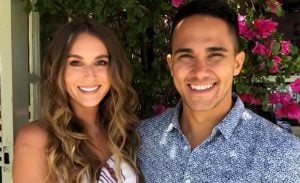 Big Time Rush and Spy Kids fans are in for a treat as married couple and actors Carlos and Alexa PenaVega are filming a Hallmark TV movie together in Vancouver right now!

29-year-old Carlos is known for his role in the show and band Big Time Rush and for hosting Webheads. His better half, 30-year-old Alexa is known for playing Carmen Cortez in the Spy Kids movies and a recurring role in the series Nashville.

They were married in 2014 and have one kid together. They are currently expecting baby number two!

It’s HAPPENING… AGAIN!  WE’RE HAVING ANOTHER BABY!!! 2019 another PenaVega is joining the family! This year we will officially be able to say we have “kids”! Our minds are blown and we are beyond blessed and excited for our growing family! #ClearbluePartner #ClearblueConfirmed pic.twitter.com/DXP7RAwZbz

The couple competed against each other on the 21st season of Dancing With The Stars, Alexa being eliminated 7th and Carlos 8th. Bindi Irwin went on to win that season.

New episode up on our YouTube channel #lexloveslos I leave my iPad on the airplane as we travel from MAUI to LA to VANCOUVER !!! Make sure to subscribe if you aren’t already!! New videos every Monday and Friday :) (link in bio) @vegaalexa @oceankingpenavega Shout out to @hawaiianairlines for being amazing throughout our entire travel day :) #notsponsored #theyarejustthebest

Can't WAIT to show you guys what we have been working on!!! https://t.co/pHCaioMvFo

Buenos días / Good morning!! Missing the warmth today. Even when the sun is out Canada is COLD

Both entertainers have starred in other Hallmark television movies before including together in Love at Sea and Enchanted Christmas. Last year Carlos shot A Midnight Kiss in Vancouver with Adelaide Kane for Hallmark. He was also in Vancouver for the CW’s show Life Sentence starring Lucy Hale. The show was cancelled after a 13-episode first season run.

Now the pair joins Hallmark Movies & Mysteries #MustSolveSundays with a new TV movie series titled Picture Perfect Mysteries. It shoots in Vancouver until March 22 and is expected to premiere on Hallmark on June 2. It also stars local actors Sunita Prasad and Trezzo Mahoro.

A complete day of errands around LA on 3 hours of sleep ✅ Next stop 🇨🇦! #pictureperfectmysteries 🎥

✌️out MAUI!! On the road for 7 weeks! Filming the 1st of our #pictureperfectmysteries for @hallmarkmovie @hallmarkchannel and then off for the most epic #babymoon we could have ever dreamed of :) !!! If you haven’t subscribed to our YouTube go do it!! New episodes every Monday and Friday!!! #letsgo #lexlovelos

I’m thrilled to be reunited with @vegaalexa and @therealcarlospena for our new #hallmark movie pilot #pictureperfectmysteries ! Today we shot camera and makeup tests and had a fantastic cast read-thru of the script. #set #setlife #producing #production