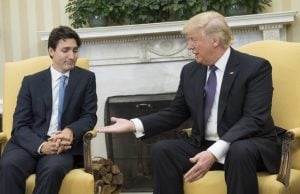 This week in Canada pop culture news, Trudeau meets with Trump for the first time since Trump has been President, and we were all rewarded with a viral photo. On the topic of international intrigue, a former music editor at Vice Media allegedly never heard the saying, don’t poop where you eat, because he may have recruited drug mules at the workplace. We learned WestJet pilots know where to find a pizza place near the airport that’s open at midnight and creeped hard on Finn Wolfhard’s Spotify playlists.

Granted, whenever our photogenic Prime Minister Justin Trudeau gets his picture taken, it’s bound to elicit a reaction from the internet. Remember Trudeau mastering yoga in the workplace? So when Trudeau met with Trump for the first time in the White House this past Monday, it’s no surprise this photo was singled out. Trudeau’s deadpan expression as he contemplates Trump’s tiny hand perfectly describes how we all would feel put in the same situation.

Yaroslav Pastukhov, former music editor at Vice Media, is alleged to have recruited interns and freelancers in the workplace to be drug mules. It’s one thing to be doing a bump at the staff party but quite another to be propositioned for a position in a transnational cocaine-smuggling ring, amirite? Pastukhov is alleged to have offered 10k to those who would travel from Las Vegas to Australia with a suitcase that was most definitely lined with millions worth of cocaine. Pastukhov no longer works at Vice Media.

Pizza is a great way to defuse what may be a tense situation. It may even get you a round of applause, as one WestJet pilot learned, after surprising rerouted passengers with pizza. An Air Canada airplane set to land in St. John’s on Feb. 8 was rerouted to Fredericton due to weather conditions, and a pilot provided a pizza pie out of his own pocket. The most surprising thing is that the pilot wasn’t even from Air Canada but WestJet. WestJet pilots just get it.

Vancouver actor, Finn Wolfhard, is famous for his role in the Netflix original drama, Stranger Things. And if you loved Stranger Things then this bit of trivia may interest you. After all, us fans need something to tide us over after the SuperBowl ad for season 2 came out. In case you need a playlist, Wolfhard’s ones up on Spotify are pretty good. Wolfhard shows an appreciation for artists in diverse genres spanning across decades. Although Wolfhard clearly favours indie rock, he also appreciates the classics from The Cure to Spice Girls. Good to know.

Kinder Morgan Challenge Asks People to Dunk Themselves in BC Waters

#KMChallenge is a social media challenge created by opponents against the Kinder Morgan Pipeline . To participate, dunk yourself in a body of water in BC and nominate participants. Similar challenges like the Ice Bucket Challenge exploded in 2014 on social media. Will it go viral here? We shall see.