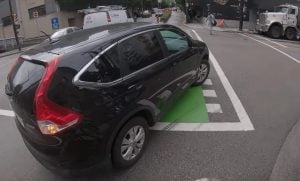 We already know how frustrating it can be to drive in the city, but have you seen what biking in Vancouver looks like?

If not, now you can.

This summer, Junayed Ahmed Nowshad decided to buy a GoPro to use as a dashcam on his daily biking commute to work. Not to mention, he even mounted a car horn on his bike, which was the only thing that sometimes got driver’s attention.

The result is numerous drivers nearly hitting Junayed and failing to properly yield to a biker on the road.

In fact, in one instance, Junayed was stopped at an intersection in downtown Vancouver when a man on the sidewalk threw a used syringe right in front of his bike.

While many drivers fail to follow the rules of the road, there are some cyclists who are also guilty of the exact same thing.