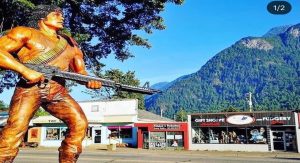 Residents in Hope, B.C. recently oversaw the launch of a giant Sylvester Stallone statue in the middle of town.

This statue of Stallone, as Rambo, is an ode to the role the town played in the 1982 film.

I’m very proud that These two massive statues of RAMBO were recently and Permanently placed in the city of HOPE, Canada , exactly where we shot FIRST BLOOD. Thanks to the artist,@ryan_villiers

Hope is the setting for the action movie, First Blood, which was the first in the four-part series.

Some of the filming locations include the Othello Tunnels, Wallace Street and the now-demolished Kawkawa Bridge.

The town is quite proud of its claim to fame, as it offers self-guided walking tours of all the locations. But its new statue will be its biggest source of pride yet, especially since Stallone himself said he was “very proud” of the monument.

You can see the statue yourself the next time you visit the B.C. town.