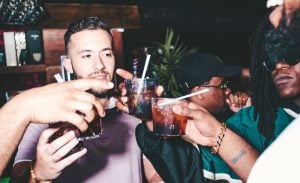 While it sometimes may feel Vancouver’s nightlife scene is lacking, there actually are a lot of cool spots open late throughout the week.

Here’s a list of notable places in Vancouver that stay open late.

RELATED: Secret Bars Of Vancouver You Need To Know About (Shhh)

This hotspot has a variety of unique Asian-inspired cocktails and fusion small plates to make you feel fancy. The dark and swanky bar can be found at 135 Keefer Street in Chinatown. They’re open until 1am all week and 2am on Fridays and Saturdays.

Tag yourselves and friends!

Dig into classic pub grub, enjoy craft brews and cocktails while watching the game on one of their several TVs. They’re located at 911 West Pender Street in downtown Vancouver and are open until 3am every single night of the week.

Check out some of the pics from this past Friday right here at STUDIO by @soulgoodevents. Head to our FB to check out the rest! Head to SoulgoodEvents.com to get on the Guestlist for FREE for this Friday featuring the #WhatMenWant Movie Release party. / 📸 by @justjash

Dance to the beats being dropped by some of the city’s best DJs. Check them out at 919 Granville Street to have a good time. They’re open until 3am Mondays, Thursdays and Fridays.

2018 is history drinking outta this bowl of mystery #birthdayshenanigans

A bustling pub that turns more into a club once it gets dark. The lively hangout features local craft brews and gourmet bar eats. Stop by 300 West Georgia Street to check it out. They’re open until 2am all nights except for Friday and Saturday, when they’re open until 3am.

Elevated bar eats and creative cocktails are available at this popular lounge. Check them out at 1898 Main Street. They’re open until 1am all week except Saturdays and Sundays when they’re open until 2am.

Sink your teeth into some pub food and enjoy a variety of craft beers on tap. They also host a lot of rock bands so if you love rock music—it’s a must. Check them out in the Granville Entertainment District at 1227 Granville Street.

Huge Thanks to James Buddy Rogers, for an Awesome Day at the BLUES BRUNCH at the Railway Stage and Beer Cafe! Also to the Wonderful Crowd, who were so responsive from the first tune! Great Surprise Guests Ken Kenneth Whitney, Sam Dulmage, Greg Harasemow, Colin Hartridge, and Special Thanks to the Lovely Audience, and Awesome Staff for an Awesome Day! Cheers, RM 😎🎸🎶🎵

Food, drinks and entertainment late—what more could you want? This spot has a bohemian vibe, good grub, craft & import beers and live music. They’re located at 579 Dunsmuir Street and open until 2am every night except for Fridays and Saturdays when they’re open until 3am.

Back and Forth Bar

🏓🍺 . . he asked me what I want to be doing right at 12:00am on my birthday, I said I want to be playing a game of ping pong with a beer in my hand And he gave me just that lol 📸: @brosquiggles

Check out this hip hangout with a wide array of cocktails, craft draft beer and snacks. They also have ping pong tables to bring out your inner competitive side. Find them at 303 Columbia Street where they’re open until 2am, except for Fridays and Saturdays when they’re open until 3am.

Cocktail happy hour at @granvilleroom is doing it right by the classics by pouring unapologetically strong drinks for $7 a piece weekdays from 4 to 7. Negroni, Daiquiri, Old Fashioned, or French 75 — pick your poison, they're just the four best cocktails. Ever.

This hidden gem is an awesome spot to hangout with friends at all hours. Enjoy a selection of drinks, bar bites and DJs spinning tunes. They’re at 957 Granville Street and open until 3am every night of the week.