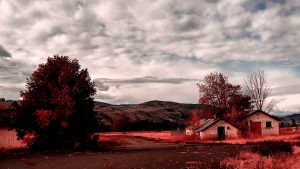 It’s the time of year for all things spooky and these abandoned places in B.C. are just that.

From a former mental health institution to forgotten ghost towns, these spine-chilling spots just may not be for the faint of heart.

RELATED: Haunted B.C. Hotels And Inns You Can Actually Stay In

Discover the creepy Stave Falls Powerhouse in Mission, which the Vancouver Paranormal Society claims is one of the most haunted places in the Fraser Valley. There have been multiple reports of strange activity unfolding here, including chairs occasionally moving on their own, mysterious whispers, a dog barking and more. The powerhouse first opened in 1912 but was decommissioned in 2000.

There’s nothing more haunting than wandering through an entire town that has been abandoned. The ghost town of Kitsault is a small community surrounded by mines and mountains. While there are houses still standing, they’ve sat empty for more than 30 years. It was built in the 1970s for the employees of a magnesium mine but they all fled when the mine became unprofitable. The town can be found in northern B.C., at the head of Alice Arm.

Cassiar was once a small company-owned asbestos mining town, located north of Dease Lake in the Cassiar Mountains. The mine was forced to close in 1992 after operating for 40 years. It has since been a ghost town and most of the houses were destroyed and burned to the ground. It’s an eerie place to visit to this day.

Last but not least, one of the creepiest places to visit in the province is the Tranquille Sanatorium in Kamloops. Going back to the early 1900s, this is where those suffering with tuberculosis were treated. More than 1,500 people died here as a result of the disease. It was even highlighted on an MTV show appropriately called “Fear.” The manager of the now historic site says it’s not a place haunted by ghosts but rather a place where its true history makes it unnerving and mysterious.