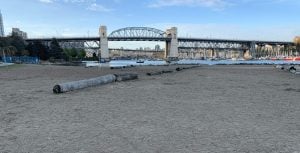 This past Saturday, the annual 4/20 Vancouver event took place at Sunset Beach despite plenty of criticism.

The largest concern ahead of the event was the damage it would leave behind and ultimately what it’ll cost taxpayers.

RELATED: Wine and Beer Will Be Available To Buy On BC Ferries This Summer

A tweet by 4/20 Vancouver organizers shows that “not a spot of garbage” was left behind.

An estimated 150,000 people made their way to Sunset Beach throughout the day for the pro-marijuana protest that featured a free concert by hip-hop group Cypress Hill.

According to Vancouver Police, the crowd peaked to approximately 60,000 people just before 4:30 p.m. and there were over 400 vendor tents set up at Sunset Beach.

Police were also happy to report that they did not have any major incidents reported to them during this year’s event.

As of right now, the final costs for this year’s event have not been totalled up yet.

In 2018, Sunset Beach was closed for several weeks to clean up and repair the area after the annual Vancouver 4/20 event. An estimated 40,000 people packed into the area, leaving behind a large amount of garbage and damage.

At the time, Vancouver Park Board Commissioner Stuart Mackinnon said that his staff needed to close the space for “major rehabilitation”.

Before this year’s event, NPA Councillor Melissa De Genova tweeted that she will “bring a motion to #Vancouver City Council to recover ALL costs”.

Public safety is paramount at #420Vancouver. After it’s over- I’ll bring a motion to #Vancouver City Council to recover ALL costs. Hoping @CityofVancouver will review business license holders who participate in this unsanctioned event . #vanpoli #getapermit pic.twitter.com/fQ7dIUhm0T

Not surprising! After hearing @DanaLarsen retract his statement yesterday and claims he has insurance. I asked @CityofVancouver staff. They say NO PROOF of INSURANCE has been received from @420Vancouver_ when can we expect that? #vanpoli #420vancouver

Future of the Event

Back in February, the Vancouver Park Board passed a motion to keep the annual 4/20 festival away from Sunset Beach by 2020.

The City of Vancouver has been looking for alternative locations since the festival made the move from the Art Gallery to Sunset Beach, without any luck.